Fractal geometry is the underlying cosmological principle. But what exactly do I mean by fractal geometry? What is a self-similar pattern? And what do I mean when I talk about fractal dimensions? To understand this let us look at a simple example, the Koch snowflake, whose construction is predicated on a simple recursive algorithm.

A Koch curve has an infinitely repeating self-similarity when it is magnified.

The Koch snowflake can be constructed by starting with an equilateral triangle, then recursively altering each line segment as follows: First divide the line segment into three separate segments of equal length. Next draw an equilateral triangle where the middle line segment is the new triangle’s base with its tip pointing outwards. Then lastly remove the line segment that is the base of the new triangle. Thus, after one iteration of this process, the resulting shape is the outline of a hexagram. Repeating this process iteratively renders the Koch snowflake. 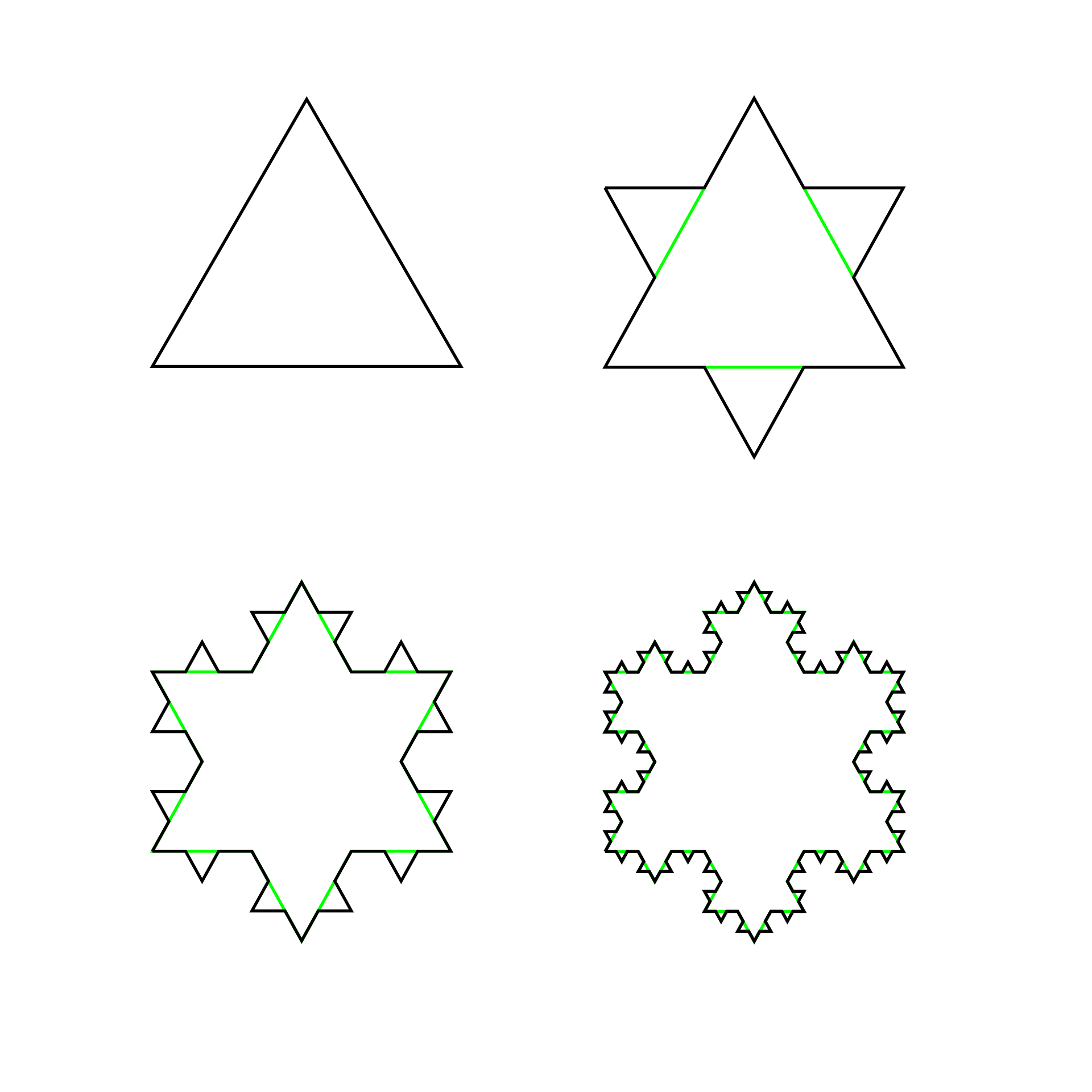 The first four iterations of the Koch snowflake.

So for the next iteration of this procedure: Again divide the line into three separate segments of equal length. Then draw an equilateral triangle, with the middle line segment acting as the base of the new triangle, with its tip pointing outwards. Lastly remove the middle line segment to complete the second iteration of the Koch snowflake algorithm. And as we proceed through all the other iterations the fractal curve that is the Koch snowflake comes into view.

A self-similar object is exactly or approximately similar to a part of itself. The self-similar pattern of the Koch snowflake is seen by taking one of the lines and dividing it into four parts. Each part is an exact copy of each other as well as a scaled down copy of the original whole. The length of each of the four parts is one third the length of the original whole.

The concept of a fractal dimension is defined by the duality in this division of the whole between both the length and scale. This dual concept in the division between length and scale is most easily seen in considering a line, a square and a cube. 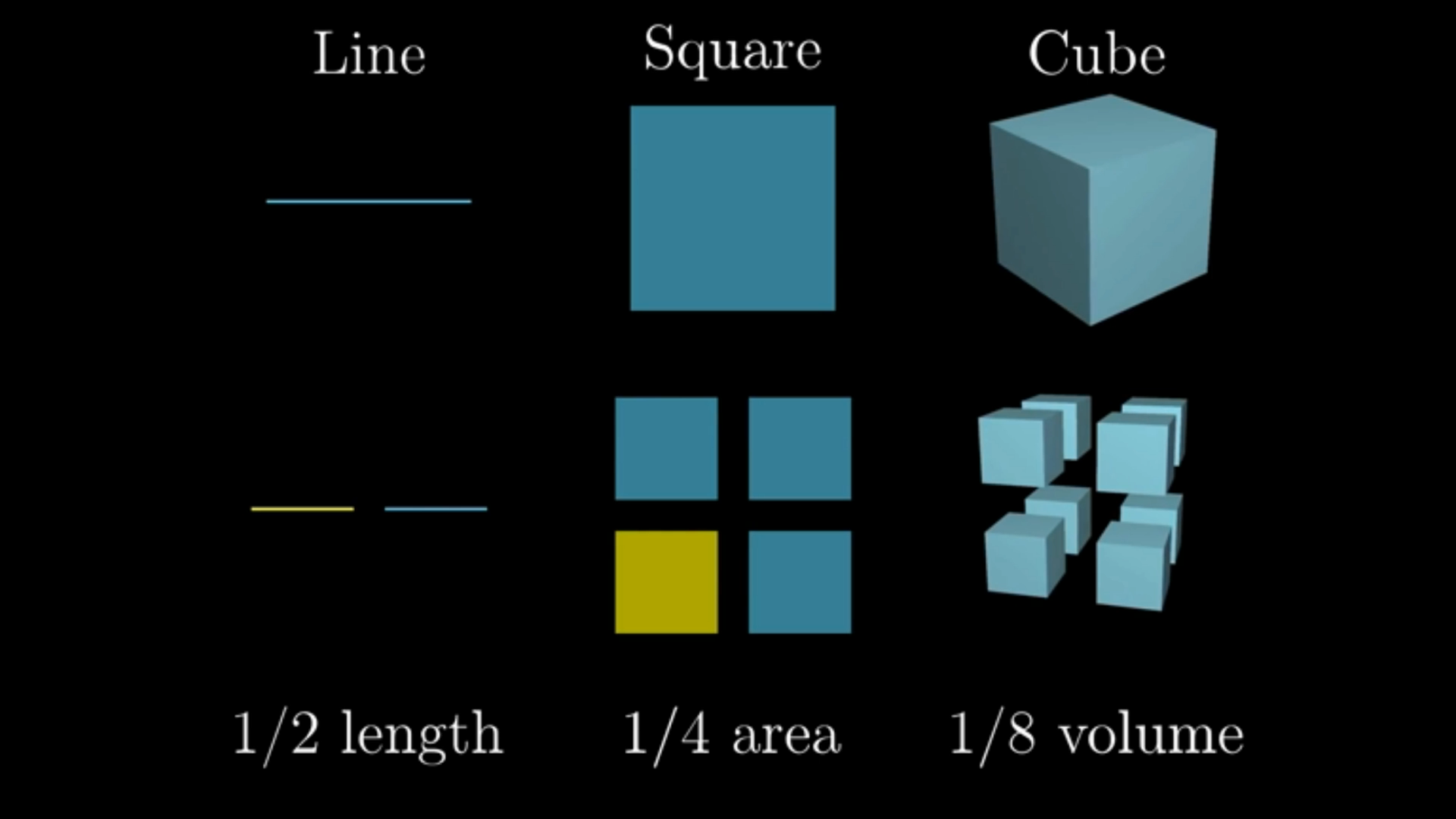 Another way of looking at this scaling process in order to produce exact copies of itself is by mass. Imagine our line is a piece of wire that is cut equally to produce two new pieces of wire, each of equal length to one another. The mass, or weight, of each of the two new wires is one half of the original whole. 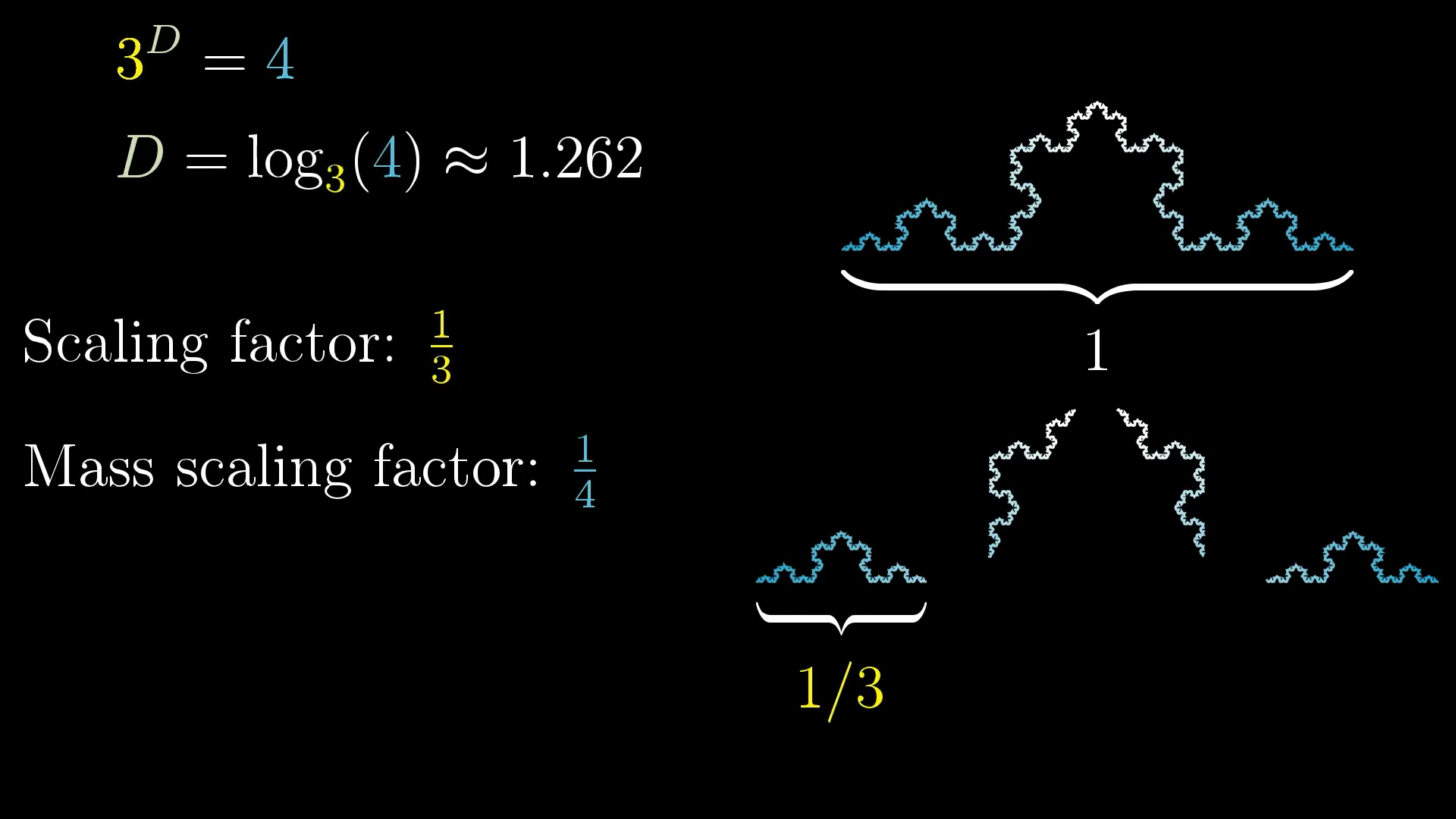 Dividing a length of the original whole by four we derive the exact same shape as the whole but scaled by a factor of one third. This is the essence of self-similarity in identifying the same pattern but at different scales. We get the fractal dimension by the power relationship between the mass scale and the length scale. Here it is \( 3^D = 4 \) which, after applying logarithms, means \( D \approx 1.262 \) .

Returning to the Koch snowflake. Here the pattern of the whole is equally divided into four parts each of which is an exact copy of the whole. The length of each of the four parts is one third of the original whole. Hence we can say it is scaled in length by one third but scaled in mass by one quarter. Its fractal dimension “D” is “one third raised to the power of D such that it equals one quarter”. Applying logarithms we see that “D” is equal to around 1.262. Hence the fractal dimension of the Koch snowflake is equal to 1.262. 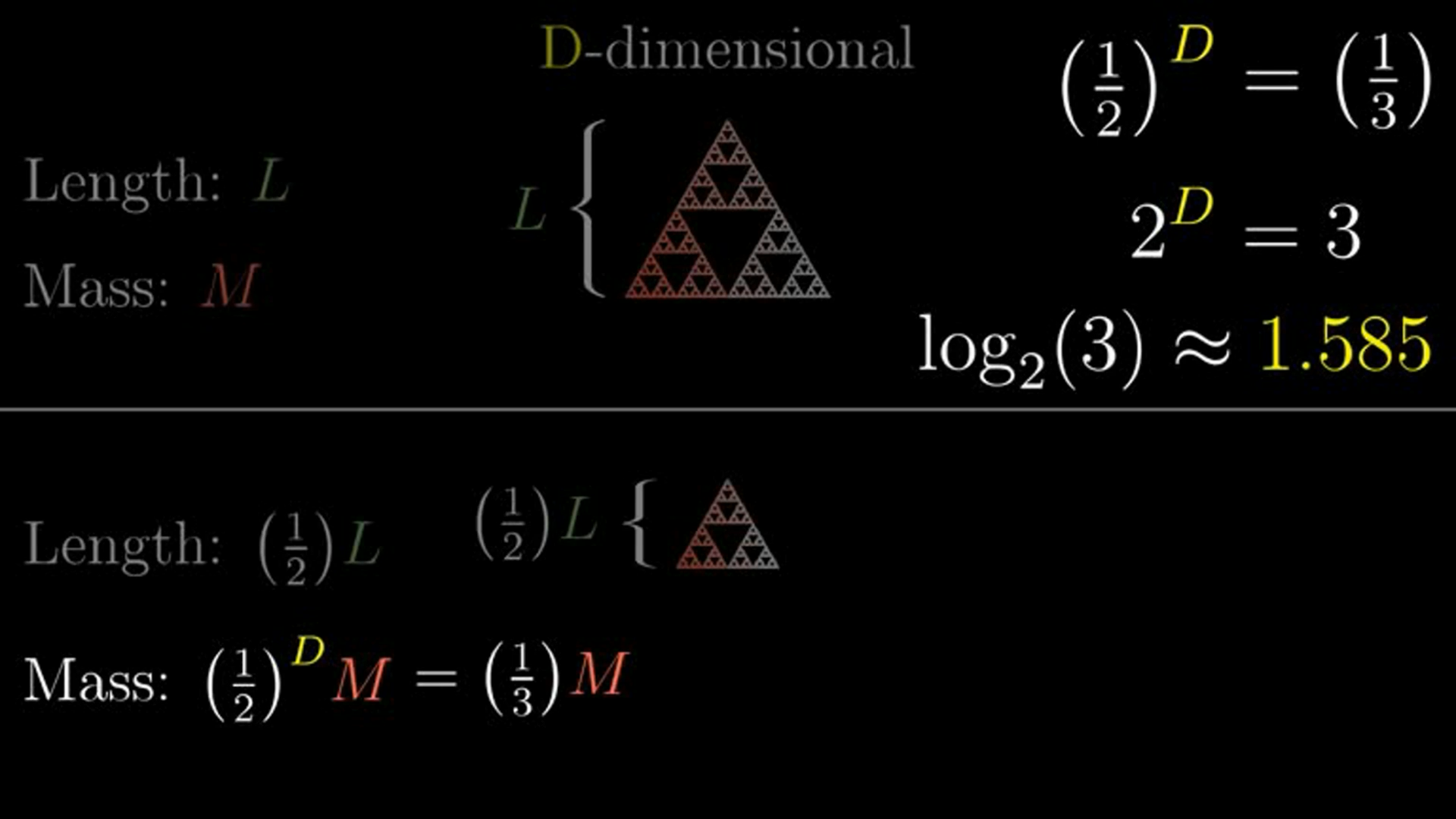 Dividing a length of the original whole by three we derive the exact same shape as the whole but scaled by a factor of one half. We get the fractal dimension by the power relationship between the mass scale and the length scale. Here it is \( 2^D = 3 \) which, after applying logarithms, means \( D \approx 1.585 \) .

As a rough analogy the measure of fractal dimension can be viewed as measurement of how rough a given curve is. This analogy is best seen when applied to the real world problem of measuring the length of a given coastline. 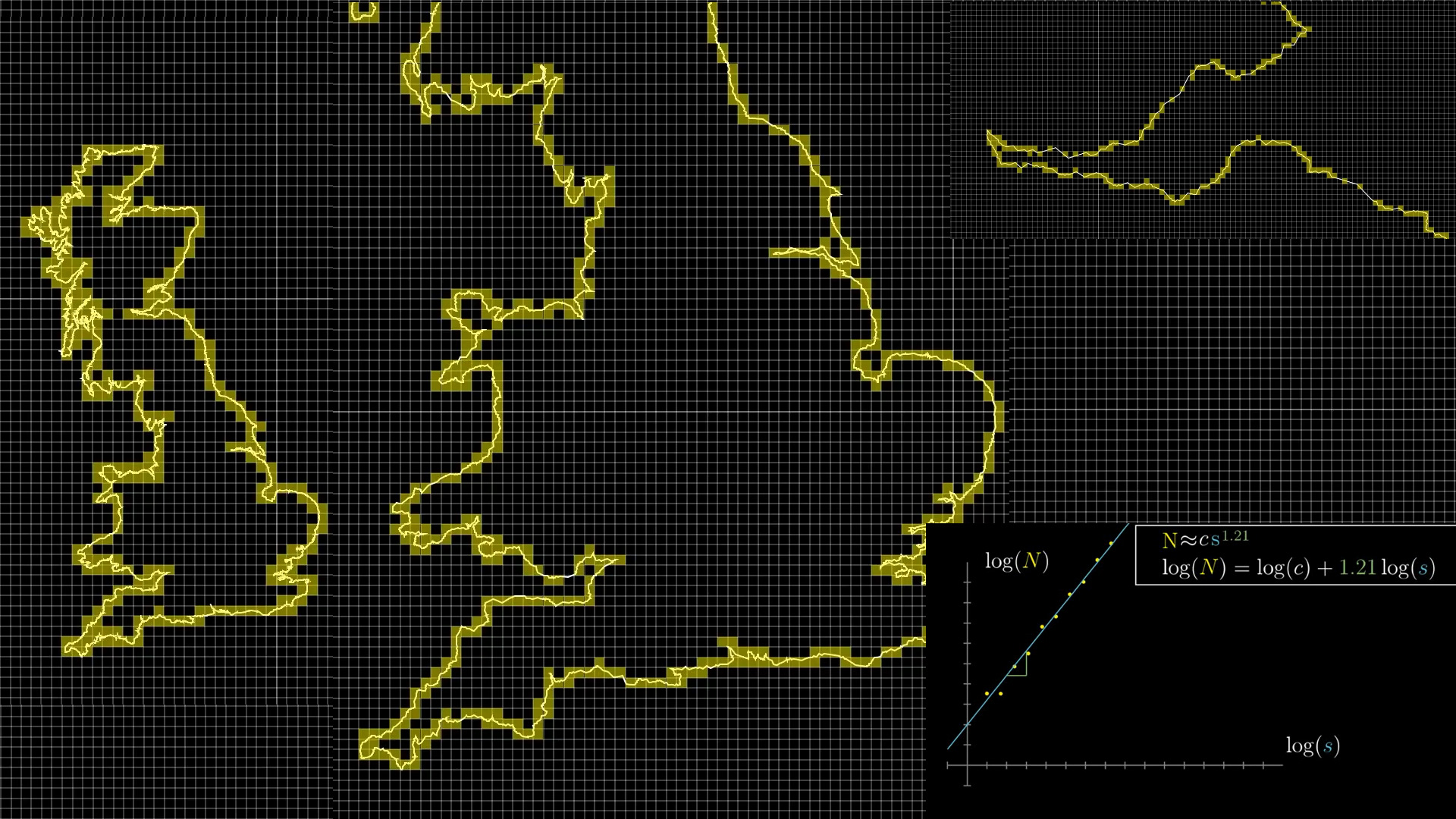 What we find is that the number of boxes touched by the coastline is roughly equal to a constant multiplied the scaling factor to the power of 1.21 which is the fractal dimension of the British coastline.

If our universe is indeed fractal then what is its fractal dimension? Maybe its value is to be found when considering Lambda, the cosmological constant? Possible, but the first step is here is to try and identify the shape of the self-similar pattern from which the universe and beyond is formed.

Our Universe the Jet

Pattern of the Universe