Fractal geometry is the underlying cosmological assumption that I use in my line of reasoning in order to explain not only the distribution of matter seen throughout the universe but more so its invisible underlying structure of cold dark matter. Having previously described self-similarity and the life cycle of a star, from cradle to grave, we now come back to looking at the Boötes void in much greater detail.

According to the cosmological principle that the universe is isotropic and homogenous this supervoid of nothingness should contain between 2,000 to 10,000 galaxies. The mere 60 galaxies that have so far been identified inside this supervoid are confined to a tube-shaped region running through the middle of the void. [2] [4] [5]

(a) Left, is a plot of all the galaxies brighter than magnitude 17 in this part of the sky. The location of the Boötes void is marked. The void contains very few galaxies, although there are a lot of foreground galaxies between us and the void. This map shows how the void is bordered to the south and west by several major superclusters, including the Boötes superclusters to the southeast. [4]

(b) Centre, a slice of the universe which shows the Boötes Void. This map is a plot of 3500 galaxies (from the HyperLeda Database) in the direction of the Boötes Void. Our galaxy is at the bottom and the top of the map is 1 billion light years away. The data is very incomplete beyond 500 million light years so the void is not very prominent, but its location is marked. Most of the galaxies located within the area of the void are galaxies which lie above and below the void. [4]

(c) Right, artist's conception of the Boötes Void and the filaments and walls that surround it.

It has a volume 236,000 Mega-parsecs cubed. It is a void whose volume is 0.27% the volume of the observable universe. These are the basic facts that we know through empirical observation.

From my point of view in trying to imagine such a massive star like object, outside the confines of our own verse, going nova the discovery of the Boötes void is a picture perfect fit. I have not sufficient words to try and communicate the magnitude of importance of this discovery with respect to the genesis story I here tell.

Imagine trying to describe the geology and movement of landmasses upon the Earth without the theory of plate tectonics. Or biology, without Darwin’s theory of evolution. It can’t be done without defining words and giving voice to the evolution of language with respect to the discovery of plate tectonics and DNA, respectively. But before the words can be defined there was the genesis of the idea.

When I first pictured my idea, a number of years ago now, all I had was two jets travelling away from some gravitational singularity. I spent a long time trying to imagine the input into the Big Bang singularity as being like that of an active galaxy. Here the supermassive black hole at the galactic core is feeding upon the material at the core. In turn the output from this feeding process was a pair of continuous jets being expelled from the poles of the singularity.

Left, imaging the Boötes void containing a massive starlike object whose hypernova death would give birth to a pair of universes as jets. Right, the Hercules-A active galaxy was how I originally imagined the formation of a pair of jets.

But an active galaxy whose supermassive black hole is feeding from the material inside the galaxy can happen for a very long time. It is not a near instant process or event. For example, looking at the Hercules-A active galaxy we see long continuous jets spanning several million light years in length. Travelling close to the speed of light the formation and evolution of these jets is a continuous process that has been ongoing for several million years at the very least.

We call the Big Bang event just that "The Big Bang". It all happened in an instant, as an explosion. So the idea that our universe was born from the same dynamics as an active galaxy did not really fit the current evidence. The Cosmic Microwave Background Radiation is after all the afterglow of the Big Bang explosion.

But a hypernova, now that fitted my vision that our universe is one of two jets picture perfect. A hypernova is the second largest explosion in the universe. The Big Bang explosion being the largest ever. So I started imaging an undefined massive star like object whose mass is at least two times as great as the weight of our own universe. Off course it is certainly easier to imagine that than the primordial atom of the classic telling of the Big Bang theory.

And then sometime earlier this year I accidentally learned about the Boötes void and in it I saw the invisible imprint of such a star. Not for the first time was my jaw on the floor as yet again to my eyes I watched a major piece of the jigsaw fall perfectly into place. Simple! So simple, and all it took was just the right chain of thought from one initial idea. 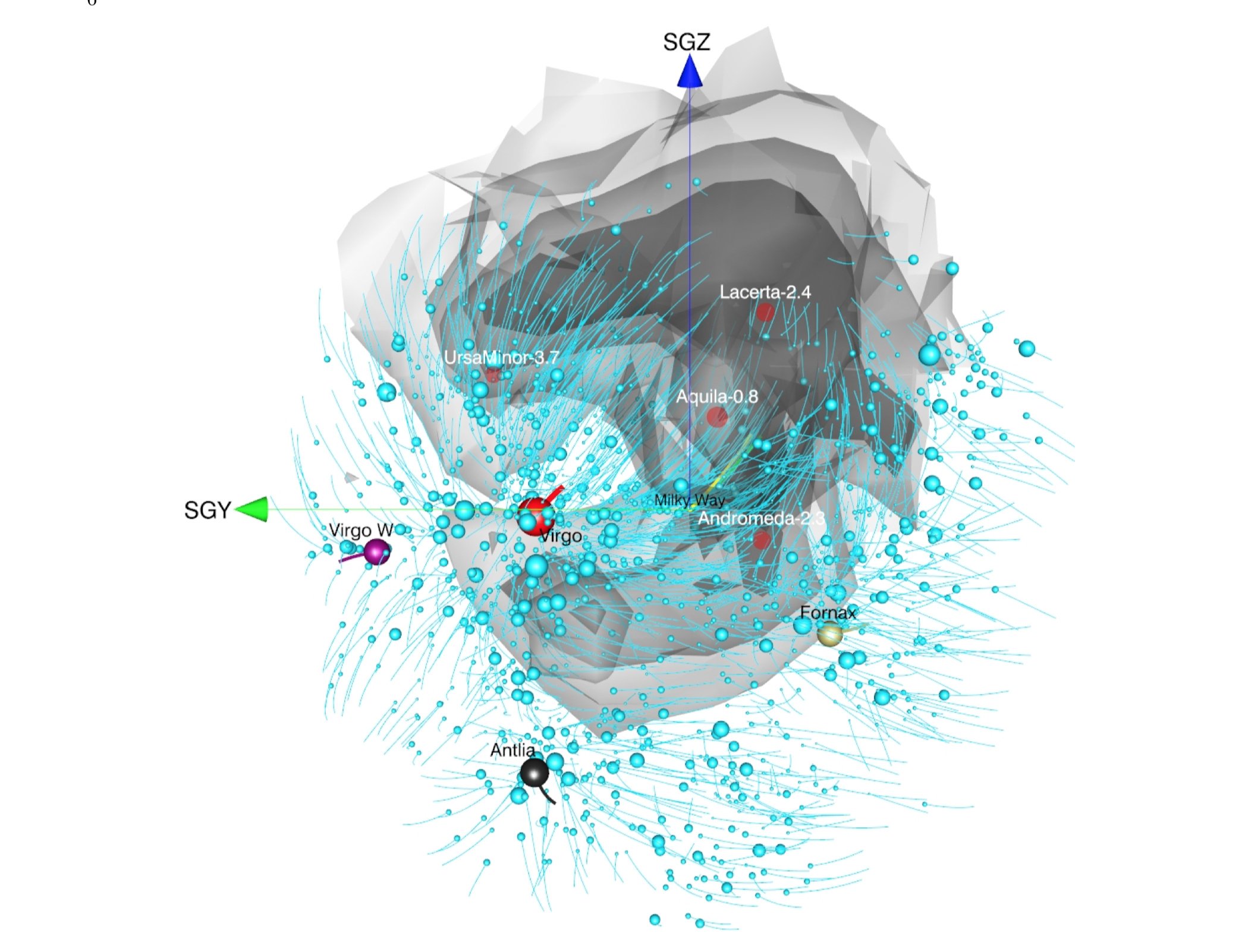 As a way to test my idea that the Bootes void was formed because our universe flowed around a hypothetical massive starlike object I considered the motion of galaxies close to the void. So if my hypothesis is valid then I would expect the galaxies close to the Bootes void to be flowing towards and then around the void. This would be similar to the flow of water in a river flowing around a given stone. Conversely, if voids formed like merging soap bubbles I would expect the motion of galaxies to be fairly randomly distributed. Although I have not tested this idea on the Bootes void, as of yet, a recent publication mapping the Local Void shows the motion of galaxies to be flowing around the void away from the direction of the Virgo supercluster. [7]

The figure shows the orbits derived from the numerical action methods of Shaya et al. superimposed on the Local Void iso-density contours. Orbits systematically descend out of the void (06.11). In this figure only, the green-blue (SGY-SGZ) coordinate arrows have length 3500 \( km s^{−1} \).

The magnitude of this idea is that it shows the egg from which the chicken hatched. Or let me rephrase that, can anyone give proof of the existence of the primordial atom? The primordial atom being the infinitely small in volume but infinitely massive in weight and perfectly smooth particle from which the universe exploded into being. How it went from being perfectly smooth to having some irregularities via quantum fluctuation is called Inflation Theory.

Super-string theory postulates that the primordial atom came about because of the collision between higher-dimensional M-branes. But in order to test these ideas of super-string theory we need to build a particle accelerator that is about the size of our own galaxy. And when your view of the world is particle orientated when you haven’t exactly defined what an actual particle truly is then such explanations are problematic, to be polite about it.

In the Expansion of Spacetime episode I present a history of Big Bang cosmology and the primeval atom as first postulated by Georges Lemaître.

"How did fundamental particles of nature come into existence?" is the question. But if you view the problem coming from the point of view that particles came first and is therefore the building block of everything such a question is non-sensical. More so, quantum field theory tells us that particles are in actuality excitation of a given quantum field like the electromagnetic field. So where did that field come from? For me, it is the unfolding of the jet into a series of concentric rings the surface of which is that for a particular quantum field.

One key idea behind the assumptions laid out by the homogenous and isotropic cosmological principle is that we are unable to truly know anything about what happened before the Big Bang. In other words, it assumes we are unable to answer the question as to exactly how and why our universe of matter came into being.

From my point of view, of fractal geometry, the shape and structure of the Boötes supervoid physically destroys this assumption. Not theoretically but physically as it has been observed and measured. Here is the shadow imprint of such a so called primordial atom.

Moreover, we see a mostly homogenous and isotropic looking universe because of the constant rotation of the jet that is our universe. Following the same physics of mixing milk with tea you can see the distribution of the milk mixed with the tea rapidly approaching a homogenous and isotropic state. So to is it with our own universe. Rotation is in everything and this is because the jet that is our verse is defined around an axis of rotation that is the Higgs field.

The Big Bang theory told by the Lambda-CDM model says everything, both time and space, came from this primordial atom. In the very instance this primordial atom came into being it devolved into near equal amounts of matter and anti-matter. I say near equal for there is a supposed imbalance between the amounts of matter and anti-matter where for every billion particles of anti-matter there were a billion and one particles of matter. Only a billionth of the volume of matter survived this annihilation process and it was this that blew up into the universe we see today. This is the tale of the Lambda-CDM Big Bang model.

The shape of the universe is flat, as measured from the microwave background radiation. A consequence of a flat universe, as told by the story of the Lambda-CDM model, is that the universe is said to be infinite. Meaning it has no edge so it goes on forever. Thus the bubble that is our observable universe, all that we can know and measure, is an infinitely small part of an infinitely much larger whole. [6]

And all this was born into existence 13.6 billion years ago. That is to say, an infinite expanse of spacetime exists which has paradoxically only existed for a finite amount of time. Add into this that what actually exists is only one billionth of the original whole that was the infinitely small primordial atom.

Is this not the most absurd series of paradoxes? A infinite universe that has existed only for a finite amount of time. More like the product of minds in love with the functional analytical arguments laid out by likes of Cantor, Hilbert and Banach.

According to my reformulation of the Big Bang theory the reason why our universe came into existence was because of an undefined star like object outside our universe going nova. Following the same pattern and dynamics as a massive star going supernova our universe is one of two jets. That other jet is our twin universe of anti-matter.

In looking at the logical basis of fractal geometry we have seen how a pattern seen at a smaller scale can be representative of the whole. Putting these two ideas together it is logical and reasonable to conclude that an undefined star like object outside the confines of our own universe is an explanation for why our universe came into being. The Boötes supervoid is the shadow of such a star like object whose size fits the bill.

The fact that the 60 galaxies inside the void are confined to a tube-shaped region running through the middle of the void echoing an axis of rotation of this star like object only adds to the certainty of my convictions. This was one of many facts I’ve learned in making this film. The process of discovery continues.